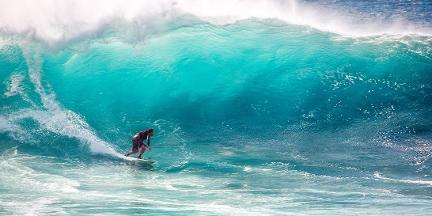 The summer of 1978, Clarence came to Hawaii to surf big waves and never left.  He could surf and farm year-round. Growing up, he spent most summers on his Aunt Tuby's family farm on the mainland, where his love of agriculture took root.  He still manages to get a surf session in now and then.  His wife says he's the only 58 year young farmer she knows that does a hand stand while surfing and enters the water with a running front flip.   Actually he's the only surfer orfarmer she knows that can do that.   Here's to surfing farmers!